The Cross of Socialism and the Society of Christian Socialists, Francis Bellamy, Edward Bellamy, Swastikas and the Pledge of Allegiance http://rexcurry.net/pledge-allegiance-pledge-allegiance.jpg 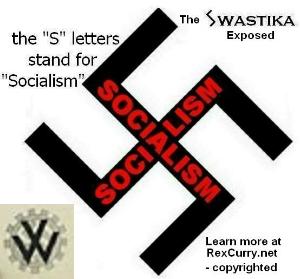 The Hakenkreuz (hooked cross) was an ancient religious symbol in Germany, related to the un-hooked cross and to the Prussian-German Iron cross and to other crosses. The Nazi alteration of the Hakenkeuz increased its visual similarity to the Iron Cross. http://rexcurry.net/christian-socialism-social-gospel.html

The swastika became known as the Socialist Cross because of Christian Socialists in the USA, including Francis Bellamy (author of the "Pledge of Allegiance") and Edward Bellamy (author of "Looking Backward"). Edward Bellamy  and his movement teamed up with the Theosophical Society, a group that used the swastika as a symbol in their socialist movement.
http://rexcurry.net/theosophy-madame-blavatsky-theosophical-society.html

The swastika was used to denote overlapping S-letters for "socialism" in the USA and later under the National Socialist German Workers Party and elsewhere, as shown in the research of the noted historian Dr. Rex Curry (author of "Swastika Secrets"). The German socialist symbol was turned 45 degrees counter-clockwise and was always oriented in the S-direction. The double-S letters of the hooked cross also denoted the "Society of Socialists" and the dogma of self-sacrifice (under both Christianity and socialism), even to the ultimate degree (the cross or crucifix was used as a means of execution and/or self sacrifice).  It also gained quasi-religious status as the cross of socialism through its use in the worship of government and socialism. http://rexcurry.net/book1a1contents-swastika.html

It is interesting to note that the name of the movement "Society of Christian Socialists" also had the repeated S-letters in its name, in another parallel to the overlapping S-symbolism of the swastika.

Edward Bellamy understood the German language and the term "Hakenkreuz." From 1868 to 1869, Edward Bellamy spent a year in Germany, learning to speak and write German and attending lectures and studying German socialism. Edward Bellamy even wrote A Süd Deutsch Volklied (South German Peoples' Song) in German on the inside cover of his notebook (dated Jan. 4, 1878, see Arthur Morgan's Edward Bellamy from Columbia University Press 1944).
http://rexcurry.net/bellamy-edward-german-connections.html

Edward's brother Frederick stated that Edward had talked and read about socialism before Edward went to Germany. Frederick wrote that Edward's letters to him from Germany were full of German socialism which "he had read and studied much at home." (see Sylvia E. Bowman's 1958 book The Year 2000).

While Bellamy was in Germany, the first German unions were founded and the German Workers' Party (Die Deutsche Arbeiterpartei) issued its program of socialist cliches that Bellamy repeated in his bestseller (Looking Backward) and his other writings for the rest of his life.  The German Workers' Party was the Party that later added the very phrase "National Socialism" to the front of its name and became the Nazis (the National Socialist German Workers' Party or Nationalsozialistische Deutsche Arbeiterpartei or NSDAP ). The ominous parallel of Bellamy ideas and U.S. socialists can be seen in the 25 point program of the NSDAP.

Edward later wrote in support of socialism, "It was in the great cities of Europe and among the hovels of the peasantry that my eyes were first fully opened to the extent and consequences of 'man's inhumanity to man.'"  But Edward died in 1898, and did not witness the worst of man's inhumanity to man in the socialist Wholecaust (of which the Holocaust was a part): the National Socialist German Workers' Party (21 million); the Union of Soviet Socialist Republics (62 million people slaughtered); the People's Republic of China (35 million).  The invasion of Poland in WWII occurred in 1939, with the National Socialist German Workers’ Party and the Union of Soviet Socialist Republics as allies in their scheme to divide up Europe.  It was preceded by Hitler's 1936 invasion of the Rhineland and the Sudetenland.

Another result of Dr. Curry's work is the frightening discovery that the straight-arm salute was created by a self-proclaimed National Socialist in the USA (Francis Bellamy) who was also head of the "Society of Christian Socialists" in the USA and involved with a socialist group that used the swastika as its symbol (the Theosophical Society). http://rexcurry.net/book1a1contents-pledge.html