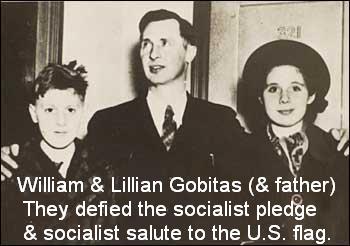 STOP THE PLEDGE OF ALLEGIANCE !

Join the heroic youngsters William and Lillian Gobitas, who at age 10 and 12 respectively, fifth and seventh grade students in government schools, refused to stand and pledge allegiance to the flag.  They defied the socialist pledge because it deifies government.  Although they lost before the U.S. Supreme Court, they were vindicated 3 years later when the court reversed itself.   The U.S. Supreme Court misspelled their name as "Gobitis" and the error is repeated often. Continue the great work that the Gobitas youngsters did not finish: end the pledge to the flag.

When the U.S. Constitution was written, people in the U.S. received private educations.  Bellamy lived during the time when schools were becoming socialized heavily by government in the U.S.   It was a view later shared by the National Socialist German Workers' Party.

Francis Bellamy and his cousin Edward Bellamy wanted the government to take over all schools and create an “industrial army” of totalitarian socialism as described in the book.   Francis Bellamy is the reason that there is often a U.S. flag flying at local schools or inside classrooms. The U.S. flag is like a white flag of surrender over local schoolhouses, surrender to takeover by government, to nationalization, to the Department of Education, and to socialism.  Francis Bellamy has been described as an advertising pioneer.  It would make more sense to say that he was a propaganda pioneer, with success comparable to Leni Riefenstahl.  The Bellamy ideas were dystopian hell here and abroad.

Government's schools spread and they mandated segregation by law and taught racism as official policy and did so through WWII and beyond
http://www.rexcurry.net/stopthepledge4.html

The bizarre practices served as an example for three decades before they were adopted by the National Socialist German Workers’ Party. When Jesse Owens competed in the 1936 Olympics in Germany,  his neighbors attended segregated government schools where they saluted the flag with the Nazi salute.  As under Nazism, Jehovah's Witnesses (and blacks and the Jewish and others) in the USA were required by law to perform the Nazi salute in the USA and robotically chant the pledge.  If they refused, then they were expelled from government schools and had to use the many better alternatives.  There were also acts of physical violence.
If parents rejected government schools in favor of the many better alternatives, some government school administrators would still harass the families.

The United States of America is one of the only nations since Germany (under the National Socialist German Workers' Party) that has designated an official pledge to its flag.

To this day, children are still ostracized and persecuted in government schools that still hold a daily ritual where children stand for a robotic recitation of a pledge and salute written by a socialist to glorify government.

And no one disputes the invidious influence of a century of socialism's racism and segregation mandated by law in government schools, where it was taught as an official policy.   Even after the socialist segregation ended the socialist schools continued racist and vicious behavior with forced busing, removing children from their neighborhoods and families,  forcing them to government facilities across town, and destroying their local  neighborhoods and the support that was provided.

Today, the government owns and operates most schools and there is constant political debate about how the government should handle myriad non-educational issues within the schools.  Imagine if the government owned and operated most churches and there was constant political debate about how the government should handle myriad non-religious issues within government churches (dress codes, cell phones, drug testing, sex ed, discrimination, forced busing to integrate churches, etc). Would the media and the citizenry advocate that the issues be solved by privatizing the churches, removing government from the churches, and championing the separation of church and state? Apparently not. If the popular reasoning regarding schools is followed, the media and citizenry would merely advocate that socialized churches adopt various policies that are the most "popular" or considered to be the most "reasonable."   Other people, instead of creating the First Amendment, would instead advocate a voucher program where every child would receive government funding for his church.  The same disaster would result.

Research whether the U.S. is the only country with a pledge and salute to a flag in government schools?  Why the bizarre socialism?

Read Francis Bellamy’s original article/speech next to the first Pledge (Youth's Companion, September 8, 1892, and see the article therein "The Meaning of the Four Centuries"). http://rexcurry.net/pledgespeech.html   A recent search of the internet indicated that the above webpage is the only source on the internet for Bellamy’s scary speech.   Why is that?  And why won't schools show historic photographs of the original pledge of allegiance?

Are Germans owed an apology by many people for the mis-impression that the bizarre military socialism and regimented chanting and saluting of the National Socialist German Workers' Party was uniquely German or originated there?

Many people vilify the Confederate flag.  How does the Confederate flag compare with the U.S. flag?  The legacy of the U.S. flag and pledge was a government takeover of schools that resulted in government-imposed racism and segregation that served as an example to the National Socialist German Workers’ Party, and even outlasted the horrid party, well into the 1960's and 70's.

Should the pledge be restored to its pre-1892 version?