The following is a photograph of an advertisement from the New Nation started by Edward Bellamy http://rexcurry.net/edward-bellamy-karl-marx.jpg

Marx said "The chief mission of all other races and peoples, large and small, is to perish in the revolutionary holocaust.”

Bellamy (1850-1898), the product of Anglo-Saxon Puritan stock, was disturbed by the massive immigration of central and southern European newcomers into the cities of the northeast.

His dogma and that of Marx led to the socialist Wholecaust (of which the Holocaust was a part) under Stalin, Mao and Hitler: ~60 million killed under the Union of Soviet Socialist Republics; ~50 million under the Peoples' Republic of China; ~20 million under the National Socialist German Workers Party.

In 1935, long after Bellamy stopped selling his “New Nation” periodical paired with Marx's book, Columbia University asked three people to prepare independent lists of the 25 most influential books since 1885. The judges were philosopher John Dewey, historian Charles Beard and and the editor of the Atlantic Monthly, Edward Weeks. On each of the lists Bellamy's novel “Looking Backward” (promoted in the New Nation) ranked among the top two books. At the top of each man’s list was Karl Marx’s “Das Kapital.”

Bellamy's book had been an international best-seller, translated into every major language including, it is sad to note for so many brutalized people, Russian, Chinese and German.

Bellamy's use of groups (Nationalism Clubs) to promote his book's national socialism provides another comparison to the growth of national socialism in the 1930s under the National Socialist German Workers Party and Adolf Hitler, author of the book "Mein Kampf." The Columbia University survey reflects how influential the dogma was at that time.

Edward Bellamy's cousin and cohort Francis Bellamy was the origin of the so-called “Nazi salute”, the stiff-armed gesture used under German national socialism. The salute was actually the “American salute” in that it came from Francis' Pledge of Allegiance, which began with a military salute that was then extended outward to point at the flag. http://rexcurry.net/pledge-allegiance-pledge-allegiance2.jpg

Both Bellamys referred to themselves as national socialists and touted "military socialism" (their term. they wanted all of society to emulate the military). They influenced the worst socialists worldwide, including National Socialist German Workers Party and its rituals (robotic chanting to flags & leaders), dogma, and symbols (including the use of the swastika to symbolize overlapping S-letters for "socialism" under German national socialism). The above are some of the discoveries in the the work of the documentarian Dr. Rex Curry. http://rexcurry.net/pledgebackward.html

The Bellamys also preached the deadly dogma of "economic equality." The following is a photograph of the front page, listing editor Edward Bellamy. http://rexcurry.net/edward-bellamy-new-nation.jpg

The Bellamys wanted government to take over all educational institutions and create an "industrial army" to spread their dogma.

The Nationalist magazine was also started by Edward Bellamy, with the assistance of Henry Willard Austin. Note that the publishing organization was named "THE NATIONALIST EDUCATIONAL ASSOCIATION" in deliberate similarity to the National Education Association (NEA). This is a photograph of the Nationalist Magazine from Edward Bellamy http://rexcurry.net/edward-bellamy-the-nationalist.jpg 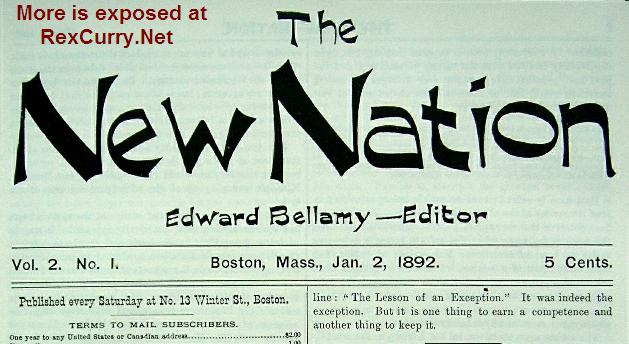 The above is a front page for the New Nation Magazine and it lists the editor, Edward Bellamy, who preached the deadly dogma of "economic equality."
Edward Bellamy http://rexcurry.net/edward-bellamy-the-nationalist.jpg NATIONAL EDUCATION ASSOCIATION 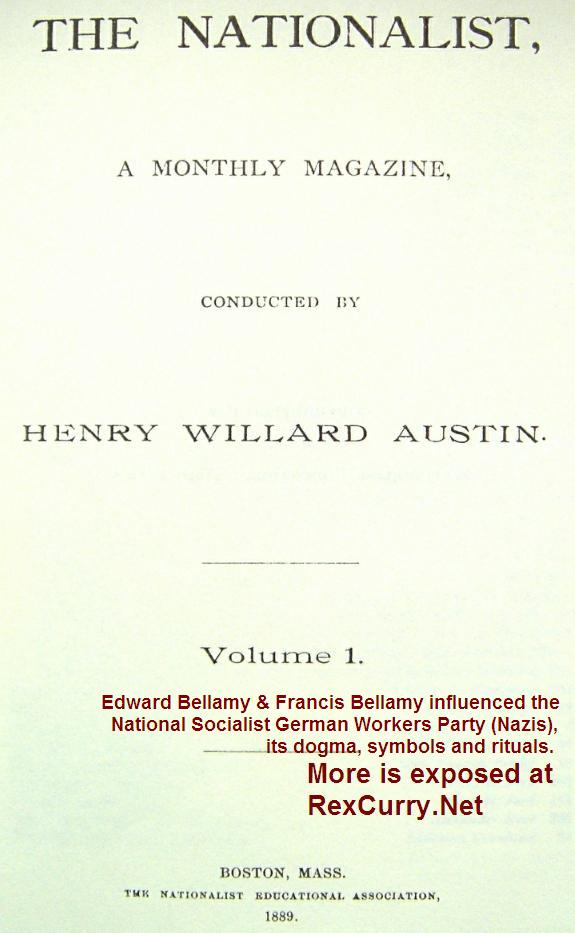 NATIONAL EDUCATION ASSOCIATION http://rexcurry.net/edward-bellamy-the-nationalist.jpg Edward Bellamy
Above is the Nationalist Magazine started by Edward Bellamy, with the assistance of Henry Willard Austin.  Note that the publishing organization was named "THE NATIONALIST EDUCATIONAL ASSOCIATION" in deliberate similarity to the National Educational Association.

The Larkin Co. published several "albums" with portraits and brief biographies of notable individuals as marketing tools for its Sweet Home Family Soap. Edward Bellamy appeared in a number of these published in the late 1880s and early 1890s, along with such individuals as George Washington, Otto Von Bismarck, Ulysses S. Grant, and Robert E. Lee.  http://sites.google.com/site/francisbellamy/Edward_Bellamy