Germans are owed an apology by the U.S. and by anyone who thinks that the military-socialism and salute of the Nazis originated in Germany. An American organization is gaining support to set the record straight. http://rexcurry.net/pledgegermany.html

The pledge of allegiance to the U.S. flag was the origin of the salute of the National Socialist German Workers' Party (Nazis).  The flag’s original straight-arm salute pre-dated the Nazis by three decades.  The claim that it was an old Roman salute is a debunked myth.  http://rexcurry.net/pledgesalute.html

The pledge of allegiance was written in 1892 by Francis Bellamy, cousin and cohort of the also-famous Edward Bellamy, author of the 1888 book “Looking Backward: 2000-1887.”

The Bellamys were self-proclaimed national socialists and they loved the military and both espoused “military socialism” (A Bellamy phrase).

The Bellamy book was an international bestseller and translated into every major language, including German, and it inspired military socialism worldwide.

The original pledge to the U.S. flag began with a military salute for the phrase “I pledge allegiance” and then the right arm extended straight outward toward the flag for the rest of the chant.   The military salute was not a random choice, and the extended right arm was the origin of the salute for other national socialists who loved militarism: the monstrous National Socialist German Workers’ Party (Nazis).  Historic photographs are linked at http://rexcurry.net/pledge1.html

Francis Bellamy’s first description of the pledge had the palm of the hand turned upward for the straight-armed gesture.   The gesture changed in use, growing in its similarity to the "Heil Hitler" salute because of the military salute (palm down) extended casually straight toward the flag.

It's as if the pledge was an original wordier "Heil Nation" and "Sieg Heil" (Hail to Victory -victory over the southern states).   The Bellamys created military socialism because they loved the War of Northern Aggression against southern independence.  The pledge memorializes their view, especially the phrase “one nation, indivisible.”   "Preservation of the Union" was not unlike “lebensraum” in the Bellamy mind.

The common claim that the salute was an old Roman salute is a myth from old movies depicting fictional Roman scenes that were inspired by the pledge, and by the fact that Francis Bellamy was from Rome, in the state of New York.   The term "Roman" was used (and still is used) to refer to people and products from the U.S. city.  Bellamy was a socialist northerner and was the original “New York liberal” albeit from Rome.  http://rexcurry.net/pledgesalute.html

Government schools teach that the pledge was created to sell flags to schools and Francis Bellamy is described as an advertising pioneer.  That is a whitewashed piece of the whole story.  A better description is that Bellamy was a propaganda pioneer, comparable to Leni Riefenstahl.

The Bellamys were not beautiful friends of liberty.  The Bellamys were belligerent toward freedom.  They wanted the government to takeover everything and impose the military’s “efficiency,” as they said.   It is the origin of the modern military-socialist complex.

Francis Bellamy is why there are U.S. flags flying at local government schools or inside classrooms. The Bellamys wanted a flag over every school because they wanted to nationalize and militarize everything, including all schools, and eliminate all of the better alternatives. During Bellamy’s time the government was taking over education.

The Bellamys wanted government schools to ape the military.  Government schools were intended to create an “industrial army” (another Bellamy phrase, and the word “army” was not metaphorical) and to help nationalize everything else.

There is only one place on the web that has Francis Bellamy’s original speech that accompanied the first pledge of allegiance. Http://rexcurry.net/pledgespeech.html

Germany and the entire world is owed an apology for the horrid influence that government had inside the U.S. in promoting socialized schools, military socialism within government schools, the creation of industrial armies, and daily robotic pledges of allegiance in military formation with the infamous straight-arm salute.

The Bellamys believed that government schools with pledges and flags were needed to entice children to embrace nationalism, militarism, and socialism.

The U.S. flag flew over a country that recognized private slavery for over a century. Thereafter, the Bellamys, the pledge, the U.S. flag, and the War of Northern Aggression inpired massive centralized socialism that resulted in nationwide government policies of racism and segregation, along with a government takeover of schools.  Children used the “sieg heil” gesture for flags flying over racist government schools through the rise of Nazism (the hand-over-the-heart spread in 1942).  The bizarre practices served as an example for three decades before they were adopted by the National Socialist German Workers’ Party.  The U.S. practice of segregation even outlasted the horrid party, into the 1960's and beyond.  That is why the Bellamys are known as the “American Hitlers” and as the first “American Nazis.” http://rexcurry.net/pledge1.html

There is only one place on the web with a historic photo of a segregated class chanting the Pledge with the original straight-arm salute.  http://rexcurry.net/pledgeracism.html

No one can measure the monstrous impact of government schools imposing racism and teaching racism as official policy for so long. Government school racism did much more damage than private enterprise could ever have afforded to do. It would have been better if government had stayed out of schools altogether. http://rexcurry.net/stopthepledge4.html

The famous desegregation case of Brown v. Board of Education ignores how government schools started the problem that Brown ended. When government began socializing schools in the late 1800's, it expanded government-mandated racism. Brown is another example of government peeing on everyone and then claiming that it was rain. In addition to ending government’s racism, Brown should have ended government schools.

Most Americans now support Bellamy’s vision of a massive government-school monopoly, and the social security system with socialist slave numbers, massive government spending, and other widespread socialism. They submitted to socialist schools that imposed racism and segregation. Children robotically chant the socialist’s pledge daily on the ring of a bell, like Pavlov's lapdogs of the state.

Some socialists chuckle knowingly at the spectacle.

Socialists robbed, enslaved and killed millions in the socialist Wholecaust (of which the Holocaust was a part): 62 million in the Union of Soviet Socialist Republics; 35 million in the People’s Republic of China; 21 million under the National Socialist German Workers’ Party. (Death tolls from the book "Death by Government" by Professor R. J. Rummel).  It was the worst slaughter in world history.

Edward Bellamy’s book was an international bestseller, translated into all major languages, including German, and inspired socialists in all the hell-holes worldwide.

The massive impact of Bellamy schemes in Germany is detailed by the author Sylvia E. Bowman in her book “Edward Bellamy Abroad.” http://rexcurry.net/pledgebowen.html

Francis Bellamy’s pledge is a chant of capitulation, and the U.S. flag in a school is a white flag of surrender, to government, to the Department of Education, to nationalization, to socialism, to militarism.  The Bellamys gave the red stripes a loathsome connotation for socialized schools.

As an attorney, I was the first to educate the U.S. Supreme Court about the pledge's poisonous past.  As a pro bono service I educate the public.

Rex Curry is an attorney, and can be reached at  lawyer (at) rexcurry.net

A GERMAN FAN - says "Thanks!" for showing that crazy socialists in the U.S. created the salute and ideas before German socialists did it in the National Socialist German Workers' Party.  http://rexcurry.net/pledgegerman.html

If you would like to own the historic collectible out-of-print book "Twenty-Three Words" by Margarette S. Miller, one is available here for $100.  The book is in mint condition, never used. This may be the only opportunity to obtain this eye-popping book   Just use the donation button below at left to purchase the book and communicate with this website at lawyer  AT   RexCurry.net 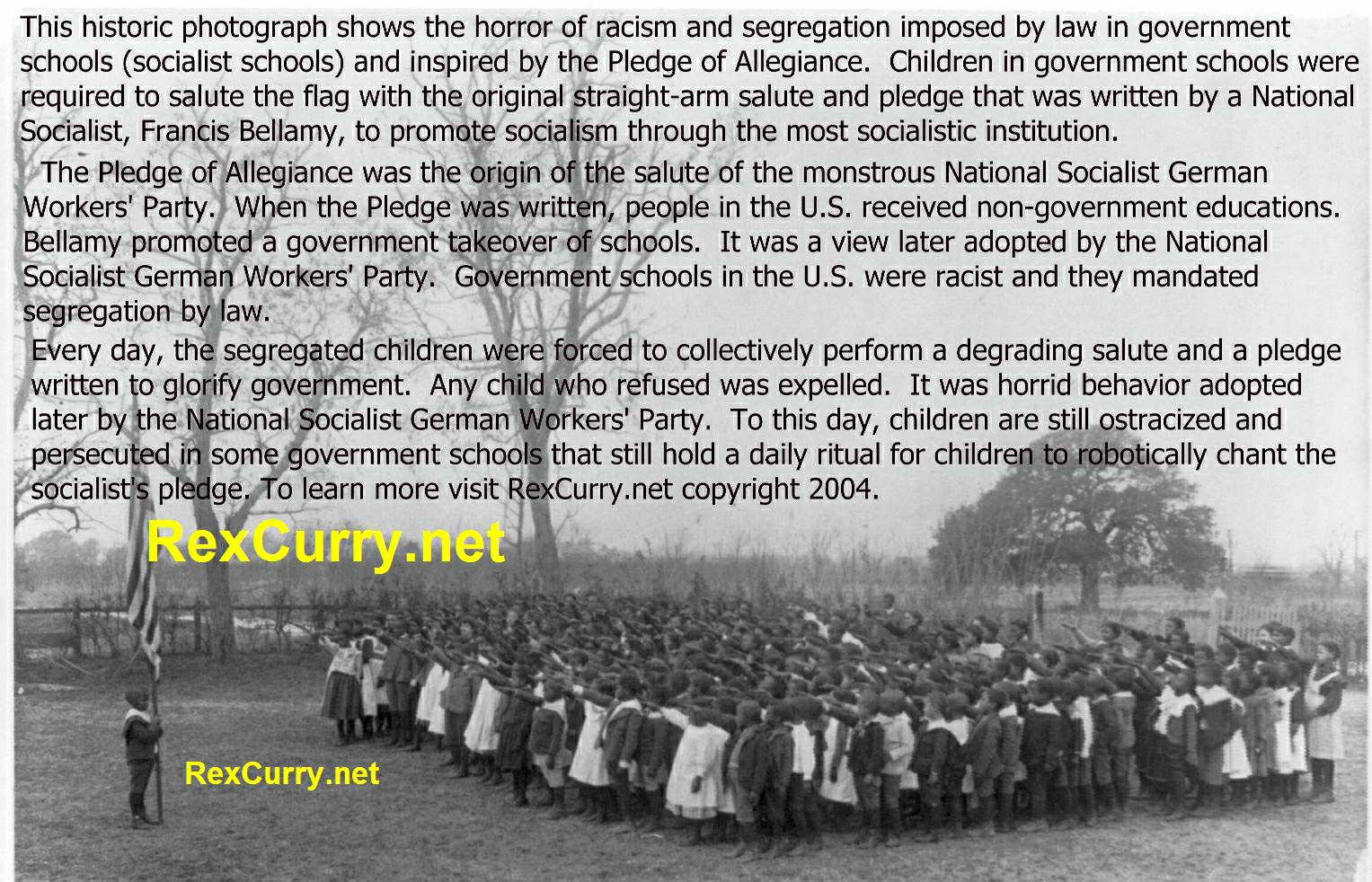