THE RELIGION OF SOLIDARITY Image http://rexcurry.net/hooked-cross.jpg 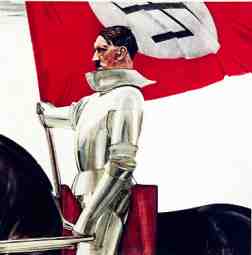 
The Religion of Solidarity was one of Edward Bellamy's early works, written in 1874 at the age of 24.  Professor Rex Curry has studied Edward Bellamy's work extensively and has shown the damage that the Bellamy family did. http://rexcurry.net/book1a1contents-pledge.html

Solidarity combines socialism with religion, and argues that individuality is a delusion and/or is unimportant. It advocates that each individual subsume himself/herself to anything and everything else, as repeated later in Bellamy's socialist utopia Looking Backward (1888). Socialist Crusades and Inquisitions http://rexcurry.net/inquisitions-heresy-socialism.html and http://rexcurry.net/bellamy-edward-the-religion-of-solidarity.html

Bellamy grew up in a religious family with religious predecessors.  Rufus King Bellamy (1816 - 1886) was the father of Frederick, Edward, and Charles.  Rufus was a younger brother of David Bellamy (the father of Francis Bellamy, author of the Pledge of Allegiance). Both Rufus and David spent their lives in the ministry preaching their versions of utopia.  Rufus and his wife (Maria Putnam Bellamy) preached to their three sons the need for activist altruism.  Charles and Edward Bellamy went on to write utopian stories and fantasy tales. Charles wrote "Were They Sinners?" and "The Breton Mills" (1879) in which he used vague altruism to justify a socialist government. Edward followed the same route with "The Religion of Solidarity" and his totalitarian utopian fantasy "Looking Backward," both considered part of the "Christian Socialism" dogma. Both brothers inpired their cousin, Francis Bellamy (author of the Pledge of Allegiance).

Edward, Charles and Francis were socialists.  Edward and Charles were brothers, and Francis was their cousin. Francis and Edward were both self-proclaimed National Socialists and they supported the "Nationalism" movement in the USA, the "Nationalist" magazine, the "Nationalist Educational Association," and their dogma of "military socialism," and Edward inspired the "Nationalist Party" (in the USA). http://rexcurry.net/book1a1contents-pledge.html  Their dogma influenced socialists in Germany, and the Pledge was the origin of the Nazi salute, as exposed by Professor Rex Curry. http://rexcurry.net/bellamy-edward-german-connections.html   "Nazi" means "National Socialist German Workers' Party." A mnemonic device is the swastika. Although the swastika was an ancient symbol, Professor Curry discovered that it was also used sometimes by German National Socialists to represent "S" letters for their "socialism."  Hitler altered his own signature to use the same stylized "S" letter for "socialist" and similar alphabetic symbolism still shows on Volkswagens. http://rexcurry.net/book1a1contents-swastika.html

Edward Bellamy withdrew from the religiosity of his mother, in favor of socialism.  The biography “Edward Bellamy” by Arthur E. Morgan states “...there is repeated evidence that in his effort to become free from the loving pressure upon him, he came to the point of spiritual rebellion.

In one of Edward Bellamy’s early journals is this short note “It has come to that now that I don’t know how a man can better serve his country than by becoming an infidel.”

Edward Bellamy continued to make socialism his religion, as shown in Bellamy's fantasy novel “Looking Backward.”  A cynical passage near the end of Chapter 26 gives the only mention of their minor status, used as a story device for spouting Edward Bellamy’s socialist philosophy.  This is an quote from the Mr. Barton’s sermon: “...it must not be forgotten that the nineteenth century was in name Christian, and the fact that the entire commercial and industrial frame of society was the embodiment of the anti-Christian spirit must have had some weight, though I admit it was strangely little, with the nominal followers of Jesus Christ.”

After Edward Bellamy’s book of 1888, and shortly before Francis Bellamy wrote the pledge (1892) for the Youth’s Companion magazine,  Francis was pushed out of the ministry for his real-life socialist propagandizing, including sermons like “Jesus the Socialist.”  An actual speech entitled “Jesus the Socialist” by Francis Bellamy is not known to exist today.  What is known is that Francis espoused Edward’s dogma.  Edward’s character Mr. Barton inspired Francis Bellamy’s ministry and its end.  Francis’ sermon “Jesus the socialist” is Mr. Barton’s sermon in “Looking Backward.”

Bellamy's The Religion of Solidarity was also published posthumously in 1940 (Antioch Bookplate Company).


Francis Bellamy openly and publicly defended Edward Bellamy's form of Socialism in the article "The Tyranny of All the People" in The Arena July, 1891 (p. 180-191). Quotes therefrom: "Socialists believe in the fearless extension of government because they have a clear and high idea of the nation as an organic relationship apart from which the individual cannot realize himself."

"Democratic government, however socialistic it may become, is nothing but democracy expressing its own will. If the individual is led to surrender certain of his freedoms for the good of all, he surrenders to a paternalism of all the people. That were better called, once and for all, a fraternalism. Socialism aims to produce an environment where not only the Golden Rule, but the Law of Love will have a living chance."

"The nation is not a mass of independent individuals, but of related individuals, who, moreover, are so closely related that they make together an indivisible organism; this organism develops according to orderly laws; this organism has perpetuity, never disjoining itself either from its past or future; and the organism has also self-consciousness and moral personality. This is the nation in which we live, and move, and have our being."

The Bellamys knew —as did Karl Marx, earlier American socialists, and Plato before them — that their state could not be established and maintained unless education was taken over by government and subsidized by theft (taxation).

The Bellamys abandoned individualistic religious ideas that respected private ownership, and they touted a Comte-inspired system, which Edward Bellamy named the Religion of Solidarity.

The Bellamys did not openly advocate the mass breeding festivals and ignorance of parents as to the identity of their own children described in Plato’s Republic (Book V). They believed men should not be allowed to provide for, and therefore monopolize, their women. The Bellamys condemned family ties with exclusive relationships between the sexes.

They supported and influenced the platform of the People’s Party in 1892, and had an increased political effect as time went on; advocating measures which would, by evolution, create authoritarian socialism.

Their "glorious" people's revolution influenced socialists worldwide and were the same ideas behind the socialist Wholecaust (of which the Holocaust was a part): 49 million slaughtered under the People's Republic of China; 62 million under the Union of Soviet Socialist Republics; 21 million under the National Socialist German Workers' Party.

After 9/11, have American flags overshadowed the cross in church?

Many churches have placed American flags in and around their worship areas, even on the altar, as a way to demonstrate their patriotism after September 11. But some people are concerned the displays obscure a far more important symbol: the cross. They warn the flag is in danger of becoming the object of idolatry, which is considered a sin in the Christian church.

Scholars say the placement of the American flag in worship areas is a perennial issue that flares up, especially around holidays like the Fourth of July. They say many Americans believe it's appropriate to have an American flag present during worship because the United States is one nation under God. But many pastors say the flag is inappropriate because it is not used for worship.

Rev. Duane VanGiesen, of Lovers Lane United Methodist Church in Dallas, says the flag doesn't belong in the worship area of churches, where the cross is supposed to be the ultimate symbol. He reminds people that the First Commandment, which states "There shall not be any other Gods before me," requires Christians to put God first and nation, business and even family second. Still, the American flag has a place at Lovers Lane Methodist Church, away from the altar and at the side of the sanctuary next to the Christian flag. VanGiesen says the American flag would never be placed directly in the worship area of his church.

But others, like Rev. Efren Ortega, of St. James Catholic Church in Dallas, says there's nothing wrong with flying the flag in the sanctuary, or even with draping it right over the altar. He placed a large American flag over the front of the altar in his church. (It has since been moved to the side of the worship are where it is normally displayed.) For Ortega, the American flag represents the soul of the country. He says his mostly immigrant congregation is very proud of America and appreciates the flag. Ortega says there is no confusion between the symbols of the cross and the American flag.

Reforming the U.S. Pledge of Allegiance
posted by Tom W. Bell of http://agoraphilia.blogspot.com/

Bless the cranky, for they dare to speak uncomfortable truths. Rex Curry doesn't much like the U.S. Pledge of Allegiance. He has good reasons to object, too, which he has carefully documented. If you want a shortcut to outrage, just cut straight to his photos of U.S. children being forced to give Nazi-style salutes to Old Glory. I suggest, though, that you also linger over the text, which describes the Pledge's ugly origins in a swamp of totalitarian socialism.


I've never liked saying the U.S. Pledge of Allegiance. As a kid, I just naturally bridled at the notion I could be forced to consent. It doesn't take a degree in philosophy to spot that hypocrisy. Having now such a degree, I still object to the notion that a child's consent to political allegiance counts for anything. Say what you will about Baptists, but I agree with them that children lack the capacity to dedicate their souls to God. So, too, with regard to an infant's capacity to pledge political fealty.

Even when voiced only by adults, I still have doubts about the Pledge of Allegiance. Set aside the salient problems with the "under God" bit. Set aside, too, the idolatry of pledging allegiance "to the flag" or to even to its political organization—"the republic for which it stands"—rather than to the ideals embodied in the U.S. Declaration of Independence and Constitution. (Chalk one up for the Methodists, inter alia, on that count.) I balk on grounds that the extant Pledge demands too much.

In its current form, the Pledge of has its speaker promise allegiance to the flag and its associated political regime, followed by a description of the latter. The Pledge does not clearly condition allegiance on "the republic" hewing to the principles that alone might justify it. Surely, though, we would owe no allegiance to a tyranny.

Here, then, I offer a first cut at a Pledge that better reflects to political philosophy that gave rise to the U.S.:

I pledge allegiance, to the republic, of the United States of America, on condition that, it respects my rights, both Constitutional and natural.

To call for revising the wording of the Pledge isn't as mad as it might at first seem. The "under God" bit got added in the 1950s, of course, and others have since suggested alternative versions. I've found no revision, however, that corrects the odiously unconditional structure of the present Pledge. I think that friends of liberty should accept nothing less (though they still might well demand more).

Regardless of the Pledge's wording, though, I'll be damned if I'm going to give one of those Nazi-styled salutes. I've got quite a different sort of salute for totalitarian statists. And happily, it economizes my effort while maximizing my message.

COMMENTS: At least now, if anybody wonders why education and state should be separated we can point to the current pledge for one reason (of many).
We can say: "Look! When the state controls education, it makes 5-year-olds pledge allegiance to it like Hitler Youth!"   posted by Gil 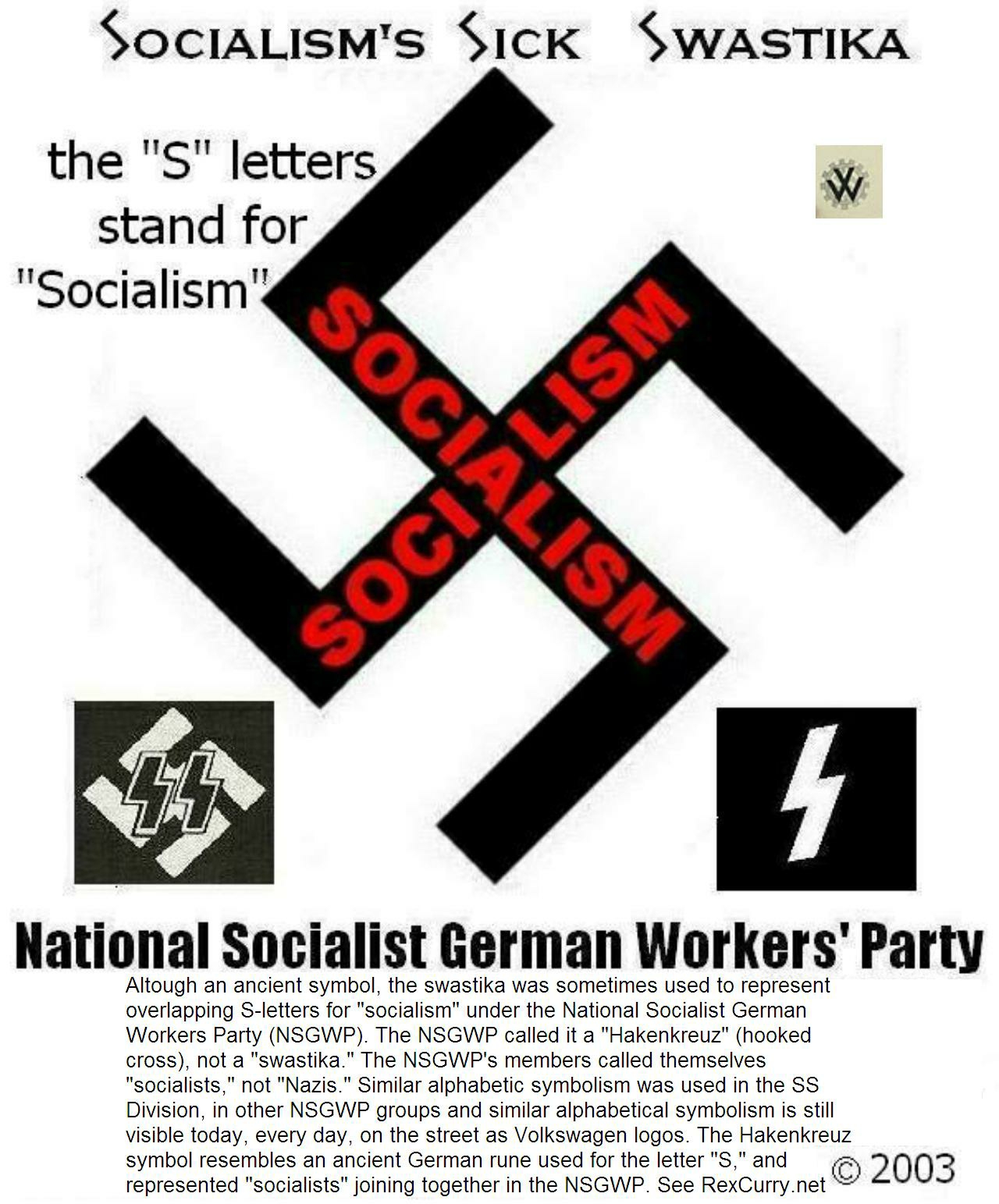